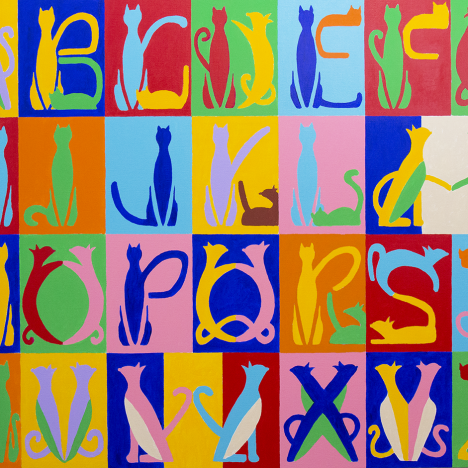 Concerning the Exhibition Tatsuya Nishimura “The CATS !!”
This time, the theme of solo exhibition of the contemporary artist Tatsuya Nishimura is “Cats”.
The exhibits of the shows held until today were composed of the works created in various styles, themes and ways of
approach such as figurative landscapes and pure abstract paintings.
Though there were some works of animals as motifs in the past, this is the first attempt for him to hold a solo exhibition featuring only one type of animal, “Cat”.
The cats as ａ main motif are simplified, abstracted and developed as characteristic visual image. Colors are gorgeous and along with black and gold which accentuates the picture plane centering around primary colors like red and blue, varied pictures are developed.
While being a painter, Nishimura devotes himself to Jazz Dance which he seems to have kept doing for a long time.
Indeed, I was surprised to hear that, but I noticed that his affection for musicals is very deep when he talked about it.
It may be natural that his taste and habits of ordinary life could come to appear in his works.
According to Nishimura, his most favorite are works by Bob Fosse, such as “Chicago”,” Cabaret” and “All That Jazz” and we can find that essence and images of these musicals are reflected in his works.
When it comes to the title of this exhibition, he is not Bob Fosse, but was inspired by a masterpiece of musical “Cats” and then named it so.

Why Cats and a musical?
It is a mysterious story, but eventually I was convinced by listening to Nishimura’s talking enthusiastically about it while showing me the photos of the musical scenes.
In the pictures, several cats appear on the background separated by some stripes and blocks in primary colors.
The cats’ poses, especially the positions and the forms of their tails accurately trace the trademark poses in the dance scenes of this musical, which is understandable when looking at the original photos of the musical.
If regarding the back of the pictures in simple geometric designs as the backgrounds to make the cats performing dances on a stage stand out clearly, this is probably the most suitable composition.
The paintings of cats in this exhibition have some variations of backgrounds such as national flags and image patterns. However, the points in common to all his works are that in the pictures, rhythm of colors and harmony exist just like music, and the repeated image patterns are continued like dance steps, and then the poses of those lithe cats remind us an ensemble of dancers.
After viewing the exhibited works, a feeling of exaltation like the one produced when enjoying a colorful stage show, is created.
There are a variety of styles and types in paintings.
We can say that paintings of cats by Nishimura has joyful screen composition filled with entertainment rather than with difficult logic and theory and thus his works make people happy.
Finally, why cats?
We hope you will enjoy finding the answer in this venue!