In the late 1980s, Hanada’s paintings had reached one goal. 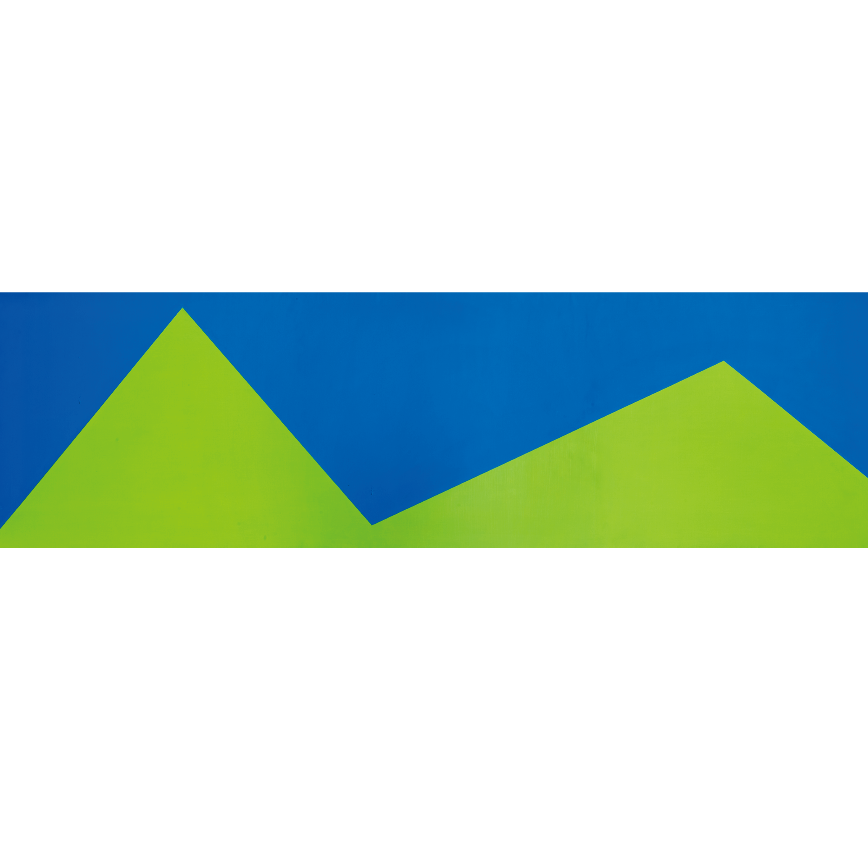 The large-scale work sized 3.5m wide, Near Mt. Sankaku (SKY-2) (1988) is one of those representative works.
“Mt. Sankaku”, with the height of 311.0 meters, is located in Sapporo City, Hokkaido, and is popular among the citizens as they can command a panoramic view of the city from the peak of the mountain. Hanada drew two peaks of Mt. Sankaku and nearby Mt. Okusankaku (Mt. Yokoshite) in the shape of simple triangle. And moreover, he used only two colors, bright yellow green for the mountains and blue for the sky.This neat expression appears as if cool and refreshing air in the mountains is drifting from there.

” Either in a forest or on a street lined with trees is fine.
If you pass by trees you will have a feeling of refreshing which you will not have when passing buildings or people. When I feel the substantial existence of trees growing branches and roots, something like a feeling of vitality bursts from inside of mine.
Even when I sketch one single line, or paint one single color, I want to pour some feelings of the substantiality and the vitality that I feel when passing beside trees onto screens. I create paintings thinking like that.”

The planes of two colors used in Near Mt. Sankaku (SKY-2) became “the field” by getting images of natural objects such as mountains and sky, and then live refreshingly in the screen. It can be said that Hanada’s challenge in 1970s which he tried to build pictorial space under the composition of screens using “geometric lines and figures” and “Hard-edge-style planes of colors finally bore fruit at that time after going through trial and error for about ten years. The works created during his fruitful period, Mt. Teine (1988)*1 and SKI II (1989)*2, are in the collection of Hokkaido Museum of Modern Art and Kushiro Art Museum, Hokkaido, respectively.

Hanada had a deep interest in not only American Art such as Barnett Newman (1905-1970) but also the pioneer of Rinpa school, Sotatsu Tawaraya (year of birth unknown – around 1640) and the great master of the world of painting in Kyoto, Heihachiro Fukuda (1892-1974).
Hanada’s way of painting in which objects in nature are abstracted into a simple form might have been influenced by such Japanese sensitivity.